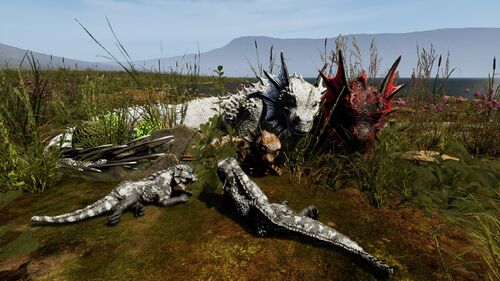 Nesting is the reproduction feature in Day of Dragons that allows players to invite other players of the same species into their nests to be their hatchlings. In order to nest two fertile adult dragons of the same species; a male and a female are required. You cannot nest if both dragons are the same gender, you or your partner are not a fully grown adults and are still actively growing, or you play as a Hybrid Dragon or Elemental which are infertile species. You can use your character panel in-game to see if you are ready to nest under the biology category on the left; there is a place where it says "nesting" and it should be either immature, mature or infertile. Immature means that you are too young to breed, mature means that you are ready to breed, and infertile means that you cannot breed at all regardless of your dragon's age.

When two dragons of the opposite species are mature and ready to breed they must be in the same pack together. The game does not consider a clan to be a same form of a group like pack does, so both parties must make sure to be in the same pack or create a new one before they attempt to breed. Dragons can be in a clan and in a pack at the same time so this does not interfere with the two forms of grouping. If you attempt to breed with another player who is not in the same group as you, they will not receive your request to breed so they cannot accept it.

Once everything is laid out and set and the two dragons are ready to breed, the male must look at the female and court her by performing a mating display by pressing a key. To accept the female must look back at the male and perform the mating display back to the male. After the two have accepted and become mates, the female can create a nest with the male close by onto a flat surface onto the ground or rock as long as there are no nearby slopes. The female will be able to lay an egg after which the male can imprint on it to start the incubation process. When the egg is being incubated it must be sprayed with the element of the parents in order to properly grow. A healthy egg will grow brightly and if its neglected by its parents the egg's glow will begin to fade and it starts loosing health. Once the incubation process finishes, the parents can invite a player from their pack via social panel into the egg become their hatchling. A female can produce up to five eggs for a single nest before she must break her nest and wait a short period of time before the male can court her again.

The hatchling's stats will be randomly generated from between the two parents, along with its skin and gender. Parents will be able to see their egg's stats after imprinting on it. These stats can be affected by the Nurse Dragon who can slightly increase a single stat by up to 2%, within certain boundaries, as well as choose a skin and gender of the offspring. The nearby presence of the Micro Feathered Dragons can also speed up the incubation process, but be careful and guard your eggs as they are Micros' favorite food.

Player's character stats are randomly generated upon spawn, but these can be perfected through breeding and nesting. The best stats that a player can obtain from natural spawning is four A's and five B's. The worst stat that can be obtained through natural spawning methods is "E". In order to perfect dragon's stats you must breed with another dragon that has the same or better stats compared to yours. If a player already has "A" or "B" stats, they would want to look for another dragon with or more "A" or "B" stats that are not located in the same stat names as their own. This is what people would call "filling your stat pool".

In order to gain better stats faster, two players must have spawned or already bred "A" or "B" stats, which the A's and B's must not be in the same stat as their partner. The more good stats the partner has from their potential mate the better. Character stats below "A++" are not connected or matter to player's bloodline, so players can obtain all stats with "A" level even if they do not have the highest bloodline quality.

The highest bloodline quality that a player can obtain is "A" that will unlock "A++" stats. This will boost most of the stats excluding resistance towards to if/any all natural weaknesses by 16%. This boost is guaranteed to the more basic stats such as the health, stamina, bite force and physical damage, but depending on the player's other stats such as the bile production would be determined by the stat quality. Example a stat cannot receive this boost unless it is below any letter lesser than A-.

The game has an inheritage feature that will track the player's lineage. In order to prevent easy access of gaining good stats and constant breeding with closely knitted groups of players, there has been set penalties to discourage breeding with characters that are related each other. This mostly includes a fatal strike into egg's stats that will lower features and aspects within your character. It means that a hatchling produced by inbreeding may have less health, stamina and shorter lifespan. As well as have less or if any resistance to physical or elemental damage, making them extremely vulnerable towards other players of any class and life stage.

You can undo some if not most of the damages created by inbreeding by introducing new pure blood into your lineage. This means you must breed with other players who are unrelated to your inheritage to outbreed the negative stats. However, this will take a long time and countless generations before the negatives caused by the inbreeding will begin to disappear. At the current early stages of breeding and testing it does not appear that even a hundred hours is capable of undoing all of the negative stats done by one-time inbreeding in the lineage. So its heavily encouraged to keep track of your character's lineage and possible mate's lineages to avoid accidental inbreeding.

There are a small number of skins that players can be obtained by supporting the game development. Currently there are six known exclusive skins which four of them have been given out during the Day of Dragons Kickstarter campaign, one from a preorder bonus that was available from Day of Dragons website and one that can be received via supporting the game on Day of Dragons Patreon. These skins are unique in their own right and they can also be received by other players via breeding, exception to the Elementals who cannot reproduce. The most important thing about these fancy skins is that they can be used to create some of the more recognized "exotic skins", which are explained in better detail in the next category. The original Kickstarter backers and Patreon supporters can be told apart from a shimmer feature that is an additional layer that creates and iridescent feature onto the dragon. Below are all currently known exclusive skins, their names and where they originate from:

While the offspring normally inherit the skin from one of their parents, there are rare cases during breeding where a skin mutation may occur. This is a skin that is a combination of the two parents' skins, which the game refers to them as Exotic Skins. These skins cannot be created with just any skin available and they require certain skin combinations to create a specific circumstances to bring the best outcome. Below we have listed all currently known exotic skin combinations and how to make them:

Community content is available under CC BY-NC-SA 3.0 unless otherwise noted.