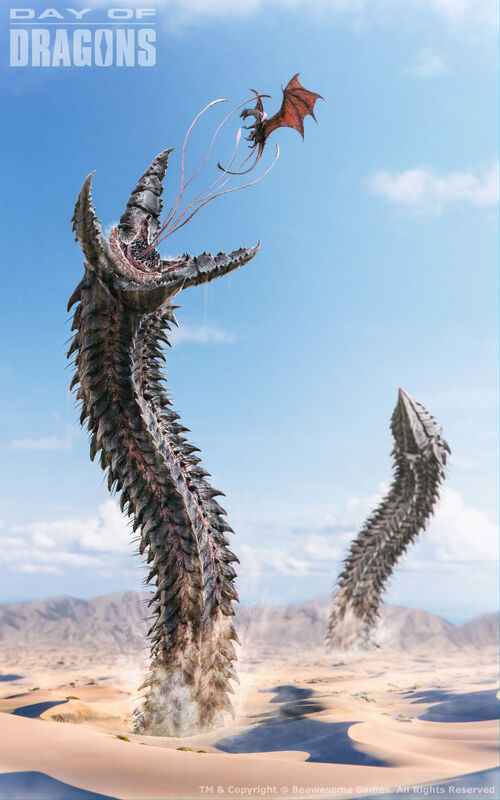 The Sandslayer Worm is a huge alpha class terrestrial invertebrate that has a strong exoskeleton covered in spikes and thin, spiny sensory organs. Its beak-like mouth opens up into four ridged jaws that open like a horrific flower. Inside lies an inner mouth that is filled with multiple rows of teeth, which injects venom that paralyzes and digests the prey. From the center of the mouth, several tentacle-like tongues can shoot out and grip the prey, dragging it into the inner mouth to be eaten.

Sandslayer Worms burrow and travel under the sands of the Dangerous Dunes biome. While berried, it uses the spiny sensory organs on its body to detect surrounding movements. The Sandslayer Worms are effective ambush hunters that will shoot themselves out of the ground from below, catching their prey off guard before dragging them down and devouring them whole. Due to their massive size and strong bodies, these worms are capable of shooting themselves up hundreds of meters into the air to catch flying dragons.

The old history of the dragonkin tell a tale of a queen and mother of all Sandslayer Worms, Dragonsbane the Dune Devourer. She is the largest Sandslayer Worm that ever has existed. So powerful and terrifying is she that not even the army of the great dragon king Jrakhon could defeat her. It is rumoured that the wyverns of the desert dunes gave up on trying to kill her long ago. Nowadays, anyone who tries to take the desert from the wyverns will face the Sandslayers. Wyverns will lure dragons to these worms so that they can kill their enemies for them, never having to shed wyvern blood.

Although this worm is huge, scary and has a lot of health, the Sandslayer Worm can be killed. Currently it is speculated that these bosses will drop stat-boosting Slayer Pearls. It is advised to use flying species of dragons and remain in the air at all times during the fight, as landing would lead to certain death. While the worm's attacks are extremely dangerous, it is possible to dodge its attack and counter with one of your own. Flame Stalker's thermal sense ability can track the worms while they are underground.

If you want to slay a Sandslayer Worm, a team of several dragons is required. Players of multiple species are recommended to balance strengths and weaknesses. Once the creature has been fully implemented, it is said that it will require the effort of an entire server to take them down.